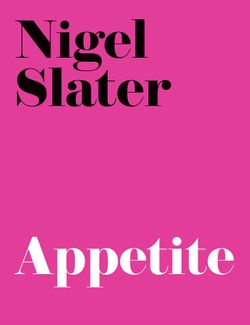 ‘I want you to take in the spirit of the recipes and to deviate according to your ingredients and your feelings. I urge you to break the rules. I want you to follow your appetite.’

Inspiring and irresistible, ‘Appetite’ takes a hundred simple classics and casts aside the insecurities of normal recipes. Ingredients are listed, followed by a suggestion of how much you might need, i.e. ‘double cream – start with 100 ml then see how you go’. Readers will be liberated to use their own judgement, indeed actively encouraged to skip half the ingredients for pared-down versions that will teach them the essence of a dish. Recipe titles reflect this approach – ‘a cheap spaghetti supper’, ‘a big pork roast’, ‘a curry to make you sweat’. Slater’s typically unpretentious style and ready wit put the fun back into food.

Nigel Slater is the author of a collection of bestselling books and presenter of BBC 1's Simple Cooking and Dish of the Day. He has been food columnist for The Observer for twenty years. His books include the classics Appetite and The Kitchen Diaries, the critically acclaimed two-volume Tender, and most recently a second volume of The Kitchen Diaries. His award winning memoir Toast – the Story of a Boy's Hunger won six major awards and is now a BBC film starring Helena Bonham Carter and Freddie Highmore. His writing has won the National Book Awards, the Glenfiddich Trophy, the André Simon Memorial Prize and the British Biography of the Year. He was the winner of a Guild of Food Writers' Award for his BBC 1 series Simple Suppers.