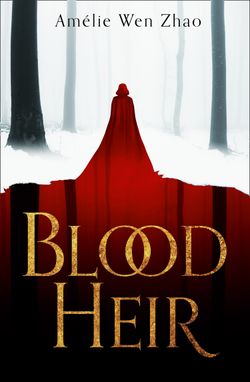 BLOOD HEIR is the first book in an epic new series about a princess hiding a dark secret and the conman she must trust to clear her name of murder.

Princess Anastacya Mikhailov of Cyrilia has lived her life in safety, hidden behind palace walls. But when she is framed for her father’s brutal murder, she must leave behind everything she has ever known to find his killer and prove her innocence. And there is only one person corrupt enough to help her – Ramson Quicktongue.
A cunning, silver-tongued crime lord of the Cyrilian underworld, Ramson has his own sinister plans – though he might have met his match in Ana. Because in this story, the princess might be the most dangerous player of them all.
A YA epic with a bloody twist, BLOOD HEIR is perfect for fans of Victoria Aveyard, Sabaa Tahir, and Sarah J. Maas.

Amélie Wen Zhao was born in Paris, grew up in Beijing, and moved to the United States when she was 18 to attend college in New York City, her current home. Blood Heir is her first novel.