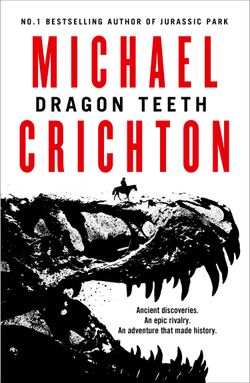 From Michael Crichton, the #1 New York Times bestselling author of Jurassic Park, comes a thrilling adventure set in the Wild West that will keep you on the edge of your seat from the first page to the last!

If you thought Jurassic Park was an adventure, you should try the Wild West!

1876. Two paleontologists, desperate to beat each other in their quest to find dinosaur fossils, brave the lawless territories of the Wild West. Facing hostile Indian tribes and towns where pistol fights are a daily occurrence, each excursion puts their lives in danger.

William Johnson, a student with more privilege than sense, joins paleontologist Othniel Charles Marsh on his latest expedition, after making a brash wager. But Marsh is convinced William is a spy for his nemesis, Edwin Drinker Cope, and abandons him.

Soon William joins forces with Cope and together, they stumble upon a momentous discovery – dragon teeth of a fantastic size! But to keep this extraordinary treasure safe, William must first confront some of the West’s most dangerous and notorious characters…

Michael Crichton (1942–2008) was the author of the groundbreaking novels The Andromeda Strain, The Great Train Robbery, Jurassic Park, Disclosure, Prey, State of Fear, and Next, among many others. His books have sold more than 200 million copies worldwide, have been translated into thirty-eight languages, and have provided the basis for fifteen feature films. He was the director of Westworld, Coma, The Great Train Robbery and Looker, as well as the creator of ER. Crichton remains the only writer to have a number one book, movie, and TV show in the same year.