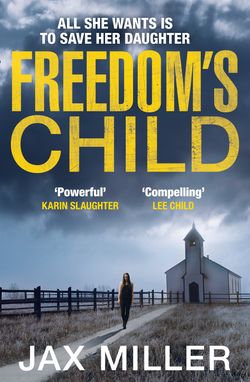 A heart-stopping debut thriller about a woman named Freedom, who will stop at nothing to save the daughter she only knew for two minutes and seventeen seconds.

Call me what you will: a murderer, a cop killer, a fugitive, a drunk…

What they don’t know is that Freedom is not her real name. That she has spent the last eighteen years living under Witness Protection, after being arrested for her husband’s murder. They don’t know that she put her two children up for adoption, a decision that haunts her every day.

Then Freedom’s daughter goes missing, and everything changes. Determined to find her, Freedom slips her handlers and heads to Kentucky where her kids were raised. No longer protected by the government, she is tracked by her husband’s sadistic family, who are thirsty for revenge. But as she gets closer to the truth, Freedom faces an even more dangerous threat.

She just doesn’t know it yet.

Jax Miller was born in New York in 1985. She started writing Freedom’s Child while travelling around America on the back of a motorcycle and finished it in the peace and quiet of the Irish countryside. Within 24 hours of writing ‘The End’ she had been signed up by a literary agent, and a few days later she had a publishing deal. Freedom's Child is Jax’s debut novel and will be published in over a dozen languages. She lives in Ireland with her husband.