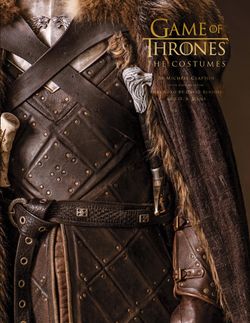 Discover the secrets behind creating the costumes for HBO’s Game of Thrones in this definitive guide.

• CRITICALLY ACCLAIMED – ‘…peruse the best of the robes, gowns, coats, and suits of armor that made up the rich fabric of Westeros in Game of Thrones: The Costumes’ Vanity Fair
• LEARN HOW COSTUMES DEFINED CHARACTERS – 440 pages of in-depth interviews and commentary on how costume design helped convey the evolution of George R.R. Martin’s beloved characters such as Tyrion Lannister, Sansa Stark, and Brienne of Tarth.
• SEE EXCLUSIVE IMAGES AND DESIGNS – Over 1,000 exclusive and rarely seen images including Michele Clapton’s designs and original concept sketches.
• HEAR FROM THE SHOW’S CREATORS – Features an exclusive foreword from Game of Thrones showrunners David Benioff and D. B. Weiss.
• AN EYECATCHING COFFEE TABLE BOOK – Deluxe 9.75 × 13 inch format.
• A PERFECT GIFT FOR GAME OF THRONES FANS – Perfectly timed for the holiday season, this gift will be cherished for a lifetime.

MICHELE CLAPTON is an award-winning costume designer who has been working in film and television for twenty years. She has received considerable acclaim for her work on Game of Thrones, winning four Emmy Awards, a BAFTA Television Craft Award, and four successive Costume Designers Guild Awards. Clapton also created acclaimed costumes for The Crown, for which she won an Emmy Award, a BAFTA for Best Costume Design, and a Costume Designers Guild Award for Outstanding Period Television Series. She was awarded the NYWIFT Designing Women Award in 2019.Gina McIntyre is the New York Times bestselling author of Stranger Things: Worlds Turned Upside Down, The Shape of Water: Creating a Fairy Tale for Troubled Times, The Art of Ready Player One, and Star Wars Icons: Han Solo. Her writing has appeared in the Los Angeles Times, the Hollywood Reporter, and Entertainment Weekly. She lives with her husband and daughter in Riverside, Illinois.