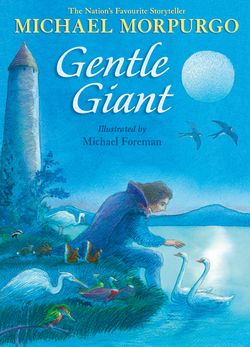 A powerful folktale about a lonely giant who lives by a beautiful lake. When he saves a girl from drowning, the giant finds the love and courage to save the lake from destruction.

On a small island way out in the middle of a silver lake there once lived a sad young man. He was sad because he had grown up into a giant of a man, very big, very strong and very frightening. Because of this, no one liked to go near him. So his only friends were the wild creatures that lived all around him.

Then one day, he saves a girl from drowning, a girl in a wide-brimmed straw hat. Little does he know how she is going to change his life forever.

Michael Morpurgo draws on traditional storytelling to weave a tale of extraordinary relevance to our own world today. A story of compassion, and love, and a simple belief in the healing powers of nature.