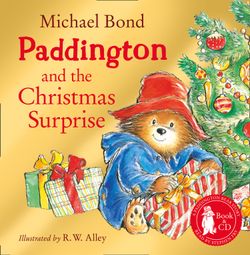 Author of over one hundred books, many of them for children, Michael Bond was born in Newbury, Berkshire, in 1926, but he grew up in Reading. On leaving school at the age of fourteen, he spent a year in a lawyers’ office before joining the BBC as an engineer. During the war he served with both the RAF and the army, and it was in 1947, while stationed in Cairo, that he wrote his first short story. Its acceptance by London Opinion sowed the seeds of a future career, but before becoming a full-time writer he was to spend many happy and fruitful years as a BBC television cameraman

One snowy Christmas Eve he was taking refuge in Selfridges when he came across a small toy bear, literally left on the shelf. Bought as a ‘stocking filler’ for his first wife, Brenda, it was to act as the inspiration for ‘A Bear Called Paddington’, first published in 1958.

In 2015, Michael was awarded a CBE for his services to children’s literature, to add to the OBE he received in 1997. Michael died in 2017, leaving behind one of the great literary legacies of our time.