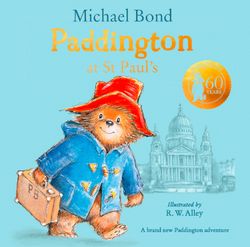 Celebrate the 60th anniversary of Paddington, the much-loved bear from Darkest Peru, with this brand new classic picture book. Paddington is now a major movie star!

When Mr Gruber takes Paddington on a special outing to St Paul’s Cathedral, there is one surprise after another. But the biggest of all comes when Paddington is mistaken for a choir bear and suddenly finds himself joining the choir for a most unusual rehearsal!