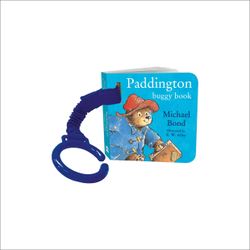 Follow a day in the life of the nation’s favourite bear, Paddington, with this adorable rhyming board book, complete with elasticated fabric strap and buggy attachment.

From getting up and getting dressed, to going shopping and getting ready for bed all over again, Paddington Bear is constantly on the move! It’s a good job his routine is broken up with a few marmalade sandwiches to keep up his energy levels!

Attach this book to a buggy, cot or highchair and get up and about with Paddington Bear. Perfect for babies on the move!