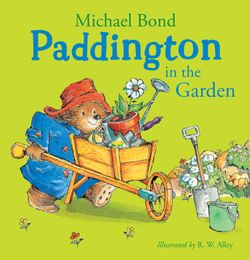 For Paddington, one of the nicest things about being a bear and living with the Brown family is being able to share their lovely garden. But gardens don’t just happen, and the one at number thirty-two Windsor Gardens keeps the whole family busy, so Paddington is only too pleased to lend a paw when they give him a chance. He may not have ‘green fingers’, but the fact that paws and marmalade are never far apart leads to some unexpectedly colourful results during National Garden Week!