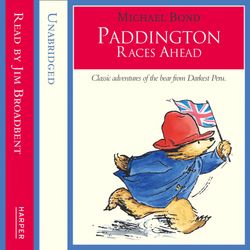 Paddington – the beloved, classic bear from Darkest Peru – is back in this fantastically funny, brand new, illustrated novel from master storyteller Michael Bond!

“My legs are a bit short for the pole vault!” repeated Paddington hotly. “But they’ve always been that way.”

Somehow Paddington Bear always manages to find himself in unusual situations. So it is no surprise when he gets into a spot of bother with some shaving cream, causes a London bus to be evacuated, and is mistaken for a famous Peruvian hurdler by a film crew. There’s never a dull moment when a certain bear is around!

Paddington Bear has been delighting adults and children alike with his earnest good intentions and humorous misadventures for over fifty years.