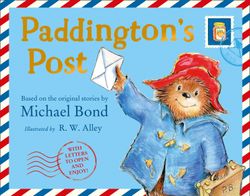 Based on the original stories by Michael Bond, a new Paddington adventure with real mail to open and enjoy!

This funny interactive picture book explores Paddington’s new life in London after travelling all the way from Darkest Peru and meeting Mr and Mrs Brown at Paddington station. Open the six envelopes inside and find out all about his new home, family and friends. These include Paddington’s first letter to Aunt Lucy, a half-price voucher for his favourite buns, a very special birthday card – and more!