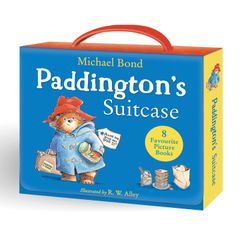 Children’s favourite, Paddington is al bear of earnest good intentions who gets drawn into mishap and adventure at every turn. Thankfully his great sense of logic and determination manage to get him out of most scrapes, albeit in perhaps some rather unconventional ways.

Find out what happens when Paddington gets all the wrong kind of attention at the zoo, goes on a funfair ride and ‘helps’ around the house…

The Paddington books contained in the suitcase are: