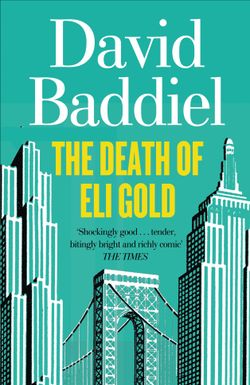 The new novel from David Baddiel, comedian, columnist and author of the critically-praised The Secret Purposes.

In New York’s Mt. Sinai hospital, the world’s greatest living writer, Eli Gold, is dying. Witnessing his death are his precocious 8-year-old daughter by his present (fifth) wife, his anxiety-ridden 44-year-old son from his third marriage, and his 89-year-old first wife, watching on TV from a care home in London. And also, secretly, his fourth wife’s fundamentalist Mormon brother, who has never got over his sister’s death in a suicide pact with Eli, a suicide pact that Eli survived.

The Death of Eli Gold is a comedy, a thriller, and a meditation on love, death, aging, sex, fame, and the idea – the dying idea – of The Great Man.

David Baddiel was born in 1964 in Troy, New York, but grew up and lives in London. He is a comedian, television writer, columnist and author of three previous novels, of which the most recent is The Secret Purposes.