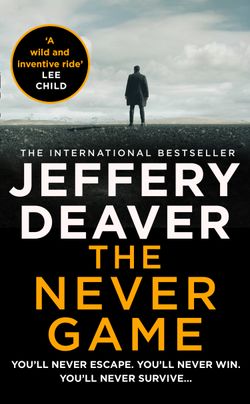 ‘Masterful storytelling — The Never Game is Deaver’s most riveting, most twisty, most unputdownable novel yet’ Karin Slaughter

Three people are kidnapped across California.

Sophie is locked inside a derelict warehouse.
Henry is abandoned in remote woodland.
Elizabeth is trapped inside a sinking ship.

They are alive, but don’t have much time to live…

Only one man can save them: unique investigator Colter Shaw. He’s an expert tracker with a forensic mind, but this will be a test even for him.

Because this killer isn’t following the rules; he’s changing them. One murder at a time…

Deaver’s most riveting, most twisty, most unputdownable novel yet’ Karin Slaughter

‘The very definition of a page-turner’ Ian Rankin