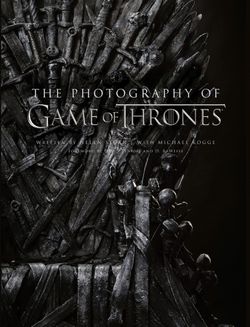 Enter the world of HBO’s global television phenomenon Game of Thrones with The Photography of Game of Thrones – the definitive photographic collection from the set of the hit series.

• UNPRECEDENTED ACCESS – 416 pages of images, details, and anecdotes covering Game of Thrones seasons 1-8.
• EXCLUSIVE IMAGES – Curated from an archive of 1.5 million photos. Enjoy over 850 hand-selected images direct from the set.
• UNSEEN MOMENTS – View legendary characters such as Tyrion, Daenerys, Cersei, Jaime, Brienne, and Jon Snow uniquely captured through Helen Sloan’s lens.
• HEAR FROM THE SHOW’S CREATORS – Features an exclusive foreword from Game of Thrones showrunners David Benioff and D. B. Weiss.
• A PRESTIGE COFFEE TABLE BOOK – Deluxe 9.75 × 13 inch format.
• A HIGHLY DESIRABLE GIFT FOR FANS – Released in time for the holiday season, this is the perfect gift for Game of Thrones fans.

HELEN SLOAN is a photographer from Northern Ireland. She is known for her role as principal stills photographer for the hit HBO series Game of Thrones, is a member of the Society of Motion Picture Still Photographers, and is a Nikon Ambassador.Michael Kogge is a screenwriter and author who has penned many books, most notably the junior novels for Star Wars: The Force Awakens, the Star Wars Rebels animated series, and Batman v Superman: Dawn of Justice. His original graphic novel, Empire of the Wolf, an epic about werewolves in ancient Rome, received great acclaim during its recent publication. He resides in Southern California and is online at michaelkogge.com and @michaelkogge on Twitter.