Girl in the Walls is a thrilling fiction debut and a highly anticipated gothic novel of 2021. Here, A. J. Gnuse introduces the novel to readers.

Maybe it’s a result of being an avid reader, so often to sit alone, hearing the noises a house makes as it drifts through the day. There are a lot of sounds, aren’t there? Maybe the air conditioning clicking on and off, gurgling pipes or a dripping faucet, a bird preening in a gutter, insects bouncing against windowpanes, or those gentle thumps in the walls as they heat under the sun. And then other sounds, without much of an explanation. I don’t think I’m alone in hearing those noises and sometimes thinking, “What if I’m not alone here?”

That’s how this novel began—an imagination running a little wild, asking: who’s here? for how long? Am I in danger? Gradually, I figured if someone really was hiding in my house, certain things had to be true.

One: This person is good at hiding. Like, real good.

Two: They have to be small. Big bodies make big noises, and these are only the gentlest sounds.

Three: They’re hiding—from me, sure, but from everyone else, too.

It’d be odd person. But perhaps one I can understand.

While drafting the novel, I spent plenty of time at our local bookshop, Old Books on Front Street in Wilmington, North Carolina. Gwenifer, the owner who is always quick to learn a name, organized readings in a back room, encircled in wooden shelves of beautiful books. To listen to stories there was to be swallowed up into the bookshop’s belly, tucked in a building as comfortable and safe as any home. Really, hiding away isn’t so hard for me to imagine—if it’s in a bookshop.

Please know I’m delighted to support you and your shops however I’m able.

I even promise I won’t secretly live there, if that’s something you don’t want.

‘Those who live in the walls must adjust, must twist themselves around in their home, stretching themselves until they’re as thin as air. Not everyone can do what they can. But soon enough, they can’t help themselves. Signs of their presence remain in a house. Eventually, every hidden thing is found.’

Elise knows every inch of the house. She knows which boards will creak. She knows where the gaps are in the walls. She knows which parts can take her in, hide her away. It’s home, after all. The home her parents made for her. And home is where you stay, no matter what.

Eddie calls the same house his home. Eddie is almost a teenager now. He must no longer believe in the girl he sometimes sees from the corner of his eye. He needs her to disappear. But when his older brother senses her, too, they are faced with a question: how do they get rid of someone they aren’t sure even exists?

And, if they cast her out, what other threats might they invite in? 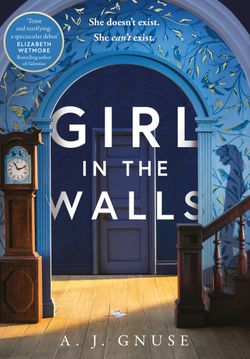 Girl in the Walls

Book Trailer – Girl in the Walls by A. J. Gnuse