When I was twenty-seven I began putting together some early notes for what has now become Kingdomtide. I was very low at the time and not all there. I was sad because I had lost someone I cared about very much. So I decided to spend the summer back in Texas with my moms out on the family ranch. We have a lot of old books out there that my dad has collected over the years. My dad was born in 1937, so he has had some time for all these books to pile up. Most of them are about the cattle business or quail hunting, and a number of them are histories of the Texas Panhandle and the various characters who saw all that through. I was reading a history of some tiny county when I came across a little smudged 1950s photograph of a stern-looking old woman. There was a name printed under. Cloris. I thought it was a good name.

I started writing in earnest about a year later. I got a wild hair to make it something of a classic survival story. Something like Touching the Void, the first-hand survival account of mountaineer Joe Simpson, or Hatchet, the young adult novel by Gary Paulsen. Often these kinds of stories are about paring down a life to get to the meaningful parts of it. I had it in my mind that Kingdomtide could be a contrary cousin to stories like those. Maybe a tale of survival with more doubt in it than hope. Maybe even no hope at all. And wherein you could find those supposedly meaningful parts of a bared life, meaningless.

I find a good deal of writing is sitting around asking yourself questions. So I asked myself some questions about grief and guilt. I thought about married couples of older generations, I thought about my dad and how his years had put him where he was and what circumstances had changed him or left him alone. And I had expected to think more about how low I was, but I wound up spending a lot more time thinking about my mom. I thought about the way she was treated when she divorced my dad and started living with another woman. Much of my time was devoted to asking myself questions about the banal, everyday meanness I’d seen growing up and the unsettling relativity of it all. So the story became more bothersome and discomforting, which is something I’m always pleased to have happen. To me, this is a sad story, and as I said I had set out to write it without any hope in it. I don’t think I succeeded. If hope didn’t make its way into it, something like hope sure did. Maybe meanness and doubt and caring for someone and losing them has something to do with hope.

Kingdomtide is published on 14th January 2020. 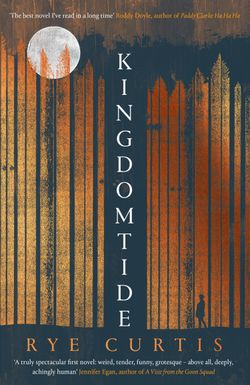