Beautifully written and incredibly powerful, Girl A is a story of redemption, of horror, and of love, and the book that will define a decade. Here, Abigail Dean introduces her debut novel.

There’s a road from my childhood, which links the village where I grew up with the closest town along. It rises fast from the village; you can’t walk it without getting out of breath. There are a few havens of cottages, at first; then the moors of the Dark Peak, wild to the horizon. This is where the street lamps stop. There’s a particular curl to the road, so that you’re never quite sure what’s ahead of you – or following behind. At the top, somebody abandoned an old carnival carriage. The carriage is absurdly, gloriously creepy. It’s like the road is delivering exactly what your imagination ordered.

The road’s still there, today. But it isn’t the same road from my childhood. I can walk it without looking over my shoulder. I’m not out of breath, because I’m not half-running. The carriage is empty, and a little sad.

When I was writing Girl A, I kept returning to that road. Childhood fears lurk in the mind’s wardrobes, hanging with small clothes. That road became Moor Woods Road, where Girl A’s narrator, Lex Gracie, grows up.

The road wasn’t the only old fear which influenced Girl A. When I was a child, I was fascinated by true crime. The train journey from my house to Manchester passed both Myra Hindley’s house and Harold Shipman’s surgery, and my dad – passing thirty minutes with a bored nine-year-old – told me the stories. This was nothing new. I once spent a sleepless week in Crete, after he unravelled the tale of the minotaur on the plane over. The stories always stuck.

As with the road, over time, that fear changed into something else. I wasn’t interested in true crime for the terror of it, but for all of the quieter stories, beating behind the headlines. If people recognize true crime stories in Girl A, I hope that’s what they find: survival and humanity, rather than fear. What lurks in the wardrobe never emerges quite the way you remembered it. 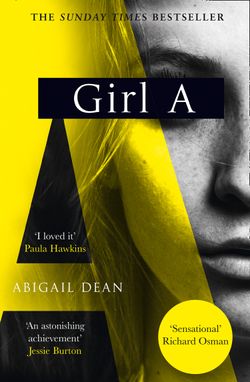