“When I started the book that became Saving Missy, I had just two scenes in mind.

The first was a lonely woman walking to a lake in a park to watch some fish being stunned. There was a fish-stunning at my local park that caused quite a stir in Stoke Newington, and I liked the idea of such a bizarre event kick-starting a story. My protagonist would be shocked out of her self-pity for an instant, and that would be the beginning of her renaissance.

The second scene was set sixty years before the first, inspired by another real-life event, though a more notorious one.

In 1956, Sylvia Plath met Ted Hughes at a party in Cambridge, a tumultuous confrontation that allegedly involved Sylvia biting Ted until she drew blood. The rest, as they say, is history.

My Director of Studies at Cambridge attended that party, and we all found the anecdote thrilling. To be there, when two literary powerhouses encountered each other for the first time! But I started thinking about it from a different angle. Sylvia and Ted had hogged the limelight for too long – what about the others who were there that night? Other poets, other drunkards, other students meeting and falling in love?

I imagined another couple seeing each other across that crowded room. When Missy met Leo…

If Missy was the same woman who went to the fish-stunning sixty years later, she would be nearly eighty at the beginning of my novel. That became an attractive prospect, because it gave me lots of time – time to tell a knotty yet tender tale of a marriage spanning the second half of the twentieth century, touching on historic events large and small. Time to explore Missy’s love story in all its forms – her strained relationship with her daughter, her longing for her absent son and grandson, her budding friendship with two women, and her gradually falling in love – with a dog.

Unpicking Missy’s past life, there was time to build her a new one.

I wrote Saving Missy to cheer myself up, give the washed-out, cathartic feeling a good weep can produce. I hope I can pass that feeling on.”

Saving Missy is published in trade paperback on 6th February 2020. 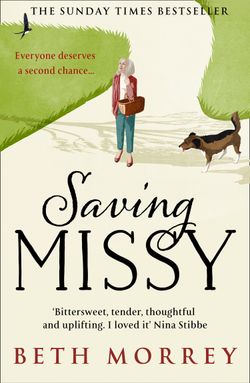 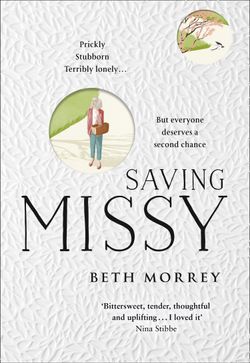