Alan Lee is the illustrator of the highly-successful centenary edition of The Lord of the Rings and diamond edition of The Hobbit. He studied graphic design and the depiction of Celtic and Norse myths and has illustrated a wide range of books, including Faeries, Merlin Dreams and Castles, and was conceptual designer for Terry Jones’ film Erik the Viking. He was awarded the Kate Greenaway Medal for his illustrated edition of Black Ships Before Troy.

From 1998 he worked as Conceptual Designer and Set Decorator on Peter Jackson’s The Lord of the Rings movie trilogy, and he received the 2004 Academy Award for Best Art Direction for his work on The Return of the King. In 2007 he was commissioned to provide paintings for The Children of Húrin, one of the ‘Great Tales’ of Middle-earth written by J. R .R. Tolkien and edited for publication by his son, Christopher. The following year he provided pencil drawings for a new edition of Tolkien’s collected shorter works of fantasy, Tales from the Perilous Realm. In 2009 he returned to his post in New Zealand to work on Peter Jackson’s trilogy of films adapting The Hobbit. 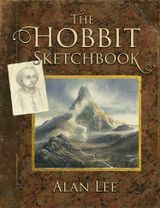