For fans of Sarah Waters, Curtis Sittenfeld and Shirley Jackson, Plain Bad Heroines is by turns sharply witty and deeply unsettling: a modern gothic novel that is utterly immersive and hugely compelling. Here, emily m. danforth, author of The Miseducation of Cameron Post, introduces her new novel and discusses the themes behind it.

I first learned about Mary MacLane when she was mentioned in the footnote of an essay I was reading about Butte, Montana. I’m used to learning about queer people this way, via footnotes and endnotes in writing about other things, other people—usually not-queer people. Historically, LGBTQ+ lives (in print) have been coded, infuriatingly subdued or straightened, or just plain erased.* You can often find us, quite literally, in the margins.

Even still, it’s telling that despite obsessively seeking-out sapphic narratives for most of my life, I was still almost thirty before I first learned about this bisexual writer from my own home-state whose scandalous debut memoir sold over 100,000 copies in its first month alone. And who, at the age of nineteen, found herself launched into literary stardom. And scorn.

I tracked-down a copy of The Story of Mary MacLane and read it in one gulp. I remember being startled by the freshness of her voice, how relevant and engaging it was, even 110 years later. I was also struck by how precisely she endeavored to describe her feelings of love and lust for her former teacher, Miss Annie Corbin, her Anemone Lady. In fact, throughout her text, she takes pains to use specific language about her sexual desire, ensuring that readers will understand her feelings for Corbin to be more than platonic. But then, our Mary had strong desires for so many things—even the charming Devil himself.

A few years after I first read it, I taught The Story of Mary MacLane in an Intro to Lit class and it prompted one of our most charged discussions of the semester. One student told me, plainly, that she was afraid of the book, that it felt dangerous to her. A few other students nodded in agreement. I had to hand it to Mary, she still managed to provoke. I also have to admit, I hadn’t anticipated the strength of their revulsion toward her book, though given my personal history, I probably should have: my own debut novel about a teenage lesbian had recently been removed from a summer reading list because a Delaware school board found its content to be too objectionable, too dangerous, for ninth graders.

For obvious reasons, this idea of dangerous books, bad books, stuck with me. Labels like these are often attached to sapphic narratives, even when the stated reasoning for attaching them takes pains not to mention the queer content at all. The Story of Mary MacLane was widely condemned, banned, for a time, even in her own hometown library. At the same time, the book inspired young women all over the country to form clubs in her honor. It was those women, Plain Bad Heroines of our past and present, that I set out to write about when telling the interwoven story of a cursed, fin de siècle boarding school in coastal New England and the making of a 21st century horror film about that curse.
Mary MacLane became a hero to thousands of readers precisely because she refused to sanitize her ambitions and desires, or to belittle her interests, no matter how quickly others—adults, critics, censors—might dismiss them as shameful or callow. Sometimes she, like all of us, “showed up to the poorest possible advantage.”

Plain Bad Heroines is a novel that combines so many of my own preoccupations and interests, things I’ve sometimes heard dismissed as lowbrow or hoary: meta-fiction, horror movies, haunted landscapes, adaptations. It’s a sapphic romance (or maybe more than one of those) bound up in a gothic novel that knows it’s a novel and wants you to remember that, too, Dear Readers. And while it makes use of footnotes, I can promise you that it doesn’t store its lesbians there.

*A personal story of sapphic erasure: I was nine when my Great Aunt Maude died. To me, at that age, she was only the stooped old woman with huge eyeglasses and a head of pearly curls. As I grew older, I came to appreciate that she’d never married and had instead devoted herself to her career in the government and, I’m told, to hosting elaborate dinner parties at her overstuffed house in Washington D.C. I don’t know, specifically, how Maude identified. I do know that when my aunt and uncle were tasked with cleaning out her house after her death, they discovered a stack of letters, carefully bound, from women with whom she once had romances. This correspondence was apparently explicit enough to confirm, beyond doubt, Maude’s queer desire. My relatives saved many items from her house—a tin full of Crackerjack toys, snapshots, novels—items which they then distributed amongst the family. It would have meant the world to me, when I was growing up gay and closeted in the 1990s, to have read those bundled love letters. It would mean just as much to read them now, but I can’t: my relatives threw them out. My cousin watched them do this and when she told me about it, years later, it was as a confession, in secret, something she might deny if ever asked again. The way Maude had loved and desired, and been loved and desired, so offended them that they chose to eliminate the proof of it. There’s such arrogance in that act, and such loathing. I don’t know anything about the women who wrote Maude those letters, but I choose to believe that some of her replies are still out there, in their own bundled stacks, in the attics or desk drawers of people who won’t let them go: who will instead cherish them and the hidden lives they illuminate.

1902, Brookhants School for Girls: students Flo and Clara are madly in love with each other, as well as completely obsessed with The Story of Mary MacLane, the scandalous debut memoir by 19 year old MacLane. A few months later they are found dead in the woods, after a horrific wasp attack, the book lying next to their intertwined bodies. Within five years the school is closed. But not before three more people die on the property, each in a troubling way.

Over a hundred years later, Brookhants opens its doors once more, when a crew of young actresses arrive to film a high-profile movie about the rumoured Brookhants curse. And as past and present become grimly entangled, it’s soon impossible to tell quite where the curse leaves off and Hollywood begins… 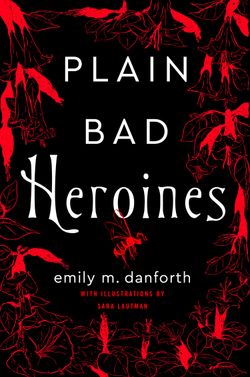