Face It is written in collaboration with critically acclaimed journalist and author, Sylvie Simmons, based on a series of recent exclusive personal interviews. The book also includes original essays written by Harry.

At HarperCollins UK, Ed Faulkner will publish, and Zoe Berville will edit the publication which will be simultaneously published by Dey Street Books at HarperCollins US.

From her New Jersey childhood with adoptive parents, through her years at the heart of New York’s underground art scene, to global superstardom as co-author of some of the best pop songs of all time, Debbie Harry is an icon amongst some of the greatest figures in music, art, film, fashion and more. A pioneering feminist–visually striking and musically revolutionary — Harry remains a trailblazer to generations of fans and artists, breaking ground for the likes of Madonna and Lady Gaga, as well as many others.

Here, for the first time, Ms. Harry pulls back the curtain and invites us into the shifting and multifaceted complexities of her interior life as it has played out over the last seventy-some years. The hardscrabble grit and grime of the early New York City years segues into a series of great commercial successes, interrupted by a plunge into heroin addiction, the near-death of long-time creative partner Chris Stein, a heart-wrenching bankruptcy and Blondie’s break-up as a band.

With Blondie co-founder Chris Stein, Debbie brought punk, hip hop and disco into the mainstream, having pioneered the new wave in New York’s pivotal 1970s downtown music scene, centered around the CBGBs club. Face It features everyone from bands Blondie came on the 1970s music scene such original artists as The Ramones, Television and Talking Heads, to Iggy Pop and David Bowie, to Jean-Michel Basquiat, to her artistic collaborations with Marina Abramovic and Debbie’s work with H.R. Giger of “Alien” fame. It explores her successful acting career (she starred in over 30 film roles including David Cronenberg’s “Videodrome” and John Waters’ “Hairspray”), her weekends with William S. Burroughs and an attempted abduction by serial killer Ted Bundy.

As a musician, an actor, a muse, an icon, the breadth of Debbie Harry’s impact on our culture has been matched by her almost Sphinx-like reticence about her inner life.

Through it all – while being acclaimed as one of the most beautiful women in the world, prized by a galaxy of leading photographers and fashion designers, beloved by legions of fans for her relentless, high-octane performances, selling 50 million albums or being painted by Andy Warhol – Debbie Harry has infused her perennial Blondie persona with a heady mix of raw sexuality and sophisticated punk cool.

In Face It, Debbie Harry invites us into the complexity of who she is and how her life and career have played out over the last seven decades. Upending the standard music memoir, with a cutting-edge style keeping with the distinctive qualities of her multi-disciplined artistry, Face It includes a thoughtful introduction by Chris Stein, rare personal photos, original illustrations, fan artwork installations and more.

Ranging from the hardscrabble grit and grime of the early New York City years to times of glorious commercial success, interrupted by a plunge into heroin addiction, the near-death of partner Chris Stein, a heart-wrenching bankruptcy and Blondie’s break-up as a band, an amazing solo career and then a stunning return with Blondie, this is a cinematic story of an artist who has always set her own path.

Face It by Debbie Harry is published on 1st October 2019. 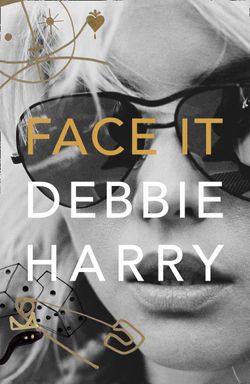