When I sat down to write The Last Bear, I had one simple idea in my head, and that was to write about the things I most loved in the world. So that meant writing about animals; the special friendship that humans, particularly children, have with them; and the deep bonds of enduring love that can be forged between their hearts and ours.

The other important ingredient was my passion for the planet – how spectacular and amazing it is but also how it needs our protection and how anyone, no matter how big or small, can inspire hope and create change.

The character of Bear came to me first. I can’t remember when or how, but suddenly he was gazing at me with his dark chocolate eyes and a forlorn, pleading expression on his face. I’ve always found it impossible to ignore animals, particularly ones as magnificent, regal and bighearted as Bear. There was a story he had to tell, and I, apparently, was the one to tell it.

When I wrote this book, most of the children’s books about climate change were dystopian. But I believe it’s not too late and that’s why I was keen to tell a story that showed how one girl, even a very little one, could create a huge impact. You don’t need to single-handedly rescue a polar bear like April (I wouldn’t advise that!), but I hope this book encourages every reader to believe that he or she can help. And if, like me, you’ve fallen in love with Bear, then the best way to help polar bears and protect our beautiful planet is to do everything you can to fight climate change.

With a loud enough roar, I know we can make a difference. 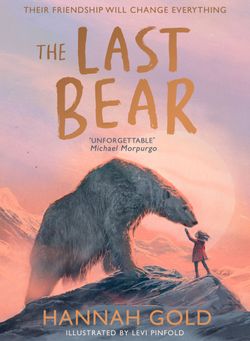