Hannah Sunderland, debut author of Very Nearly Normal, has written an article introducing readers to the main character Effie, and discusses the writing process behind the heartwarming new novel. This is a gorgeous, heart-breaking read for fans of Jojo Moyes and Gail Honeyman.

By the time I was twenty-five, I found myself in a wildly different place than where I thought I would be. When I left school at eighteen, I thought that the world was mine for the taking; how could I not think that when it had been drummed into me and all of my peers since we were old enough to understand the words that they were telling us? So, imagine my disappointment when I was set free upon that world that was mine to take by storm and I found myself floundering, without a clue as to how to wade out of the water. Everyone around me seemed to be doing well, or so their Instagram accounts said.

So, there I was, a lonely millennial with a useless university degree and its subsequent debt, a part-time job in a bar and a bank account that rolled its eyes when I approached the ATM.

I read, avidly, but I began to wonder where the stories were about the people who missed their mark and never lived up to what people expected of them?

Where were the ones who actually said the bitter thoughts that ran through their brains and the ones who patched up their hurts with Shiraz and Merlot?

And so, with the dream of writing a book that I’d had since I was ten years old, I decided to pen everything I was feeling. I focussed all of my frustrations, angers and disappointments into one place and Effie ‘meh’ Heaton was born.

Effie is the voice inside you who makes a snarky comment about the overzealous yogi at the juice bar and the devil on your shoulder who whispers your true feelings about that friend’s new coat.

I had tried to write before, penning my ideas without any hopes of them ever being read, and carrying on even after I faced the rejection of those ideas.

I think that you grow so much as a writer during the process of writing down your story, so even if it never sees the light of day it was worth all the time spent agonising over it because of what you learned along the way. But during the writing of Very Nearly Normal, I faced a whole new obstacle to overcome. About half way through the first draft, I fell ill and I was unable to write for almost a year.

By the time I felt well enough to go back to Effie, I found that she had developed whole new facets that I didn’t originally give her, she’d grown and so had the storyline, into something a lot bigger than originally planned.

One of the main themes in the book is feeling inadequate to everyone else and measuring your life against what you see of everyone else’s lives online. But what is online and what is reality are often very different things.

Effie’s journey throughout the book is one that I went on with her, making Very Nearly Normal a deeply meaningful debut novel for me. I hope that Effie goes a little way to showing people that perfection is not the goal that we should be striving for – happiness is.

Effie’s not perfect. Neither is Theo. But together, they’re pretty close.

Matilda ‘Effie’ Heaton has always felt like she’s swimming against the tide. Everyone around her has life sorted, but Effie’s living with her parents and crying into a wine bottle at night. The only thing she loves is her job at a bookshop, where she can lose herself in other people’s stories.

But then she meets Theo, who knows only too well that life isn’t something to take for granted. Because Theo has a life-changing secret, and as Effie starts to realise that she’s falling in love instead of falling apart, fate steps in and deals her a new hand. And this time, the stakes are high. 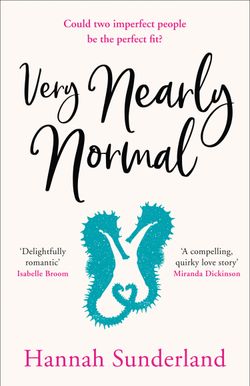