I got a job delivering pizzas in early college because it fulfilled all the requirements I was looking for in a job at the time—flexible hours, money for books and beer, low amounts of effort and thinking required—plus, I liked driving, listening to music, and smoking weed, so it was nice to do it with destinations in mind.

As I was doing the job, I didn’t think about writing anything related to it. It was just a shitty job that I had. I didn’t even do it for that long, quickly moving to waitressing and eventually, bartending (better tips). It wasn’t until my last year in school that I first began thinking of writing a novel about a delivery girl.

I lived in this house off campus with a bunch of my buddies. We called it Scum Mansion and the name truly fit the state of the house and the people that filled it. There were seven of us that lived there and paid rent, but that number could inflate to as big as fourteen depending on who had girlfriends or boyfriends. A lot of friends from out of town would crash on the couch for months at a time. We had a huge backyard and a decent sized front yard where we loved to throw parties that inevitably would be shut down by campus security. All this to say that the vibe of the house was a good one, but a chaotic one.

One Saturday a party was dying down and we decided pizza would be the perfect way to end the night. When the guy arrived, my roommate Dave and I answered the door and paid him—nothing crazy. We closed the door behind us and Dave said to me, “I wonder what that guy thinks of us.” “What do you mean?” I asked. “Well, it’s the same guy every time and every time we answer the door, there’s some kind of madness going on in the background.” I looked behind me to the living room to see all of my housemates in various states of undress yelling and constructing a puzzle, a giant light-up dildo wall that a friend of ours had built.

I thought about it a lot from there on out, thought about my own experiences delivering, the ways that we’re constantly forming opinions of those around us, how the opening of the door is very cinematic, a snapshot into someone else’s life. I didn’t start writing the novel from there, but once I got to grad school, I found I was writing a lot of short stories about similar themes—addiction, sexuality, young parenthood, how hard it was to really know anyone, etc.—and felt like maybe a novel about a pizza delivery girl was finally the way I could talk about them.

Funnily enough, when I first had the idea for the novel I was still having a lot of conflicted feelings about my own sexuality. I wrote male narrators because it was the only way I felt comfortable writing about women in a romantic way—I figured if I ever wrote a pizza novel it would be called “Pizza Boy.”

I was openly gay to all the people in my life who mattered or if anyone asked, I wouldn’t shy away from it, but I’m a private person in general and didn’t know if I wanted to be known as a Gay Writer. Then, one night at the end of my first year in grad school, I was out at a bar with my workshop. I was up getting another beer with a girl whose writing I really admired. I told her as much and she told me she admired my writing too, but she wished that I would write a female narrator. She said something like, “Your voice is so good on the page, but I love your voice right now even more. I think there are a lot of people, young women in general, who would appreciate hearing a female voice like yours.” That’s the first time I considered that maybe it should be “Pizza Girl,” instead.

I’m very grateful she said that to me because it seems silly now that I ever felt like I had to lessen myself to write a book that people would want to read, especially since the whole reason I love reading is finding voices that make me feel a little less lonely.

After I started actually working on Pizza Girl, all the character details and story started filling in and it took me a little less than a year to write.

The must-read literary debut novel for fans of Normal People and Fleabag.

Eighteen years old, pregnant, and working as a pizza delivery girl, our dysfunctional heroine is deeply lost and in complete denial about it all. She’s grieving the death of her father, avoiding her loving boyfriend, and flagrantly ignoring her future.

Her world is further upended when she becomes obsessed with Jenny, a stay-at-home mother new to the neighbourhood, who comes to depend on weekly deliveries of pickle-covered pizzas for her son’s happiness. As one woman looks toward motherhood and the other toward middle age, the relationship between the two begins to blur in strange, complicated, and ultimately heartbreaking ways.

Bold, tender, and unexpected, Pizza Girl is a moving and funny portrait of a flawed, unforgettable young woman as she tries to find her place in the world. 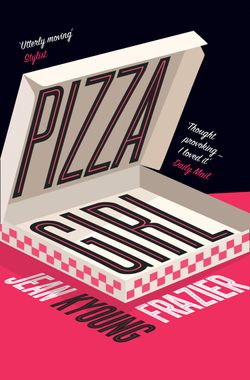 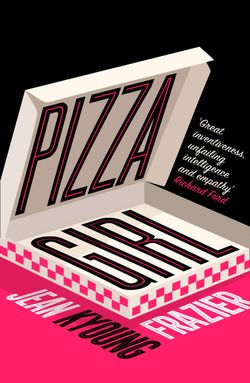