I went to Antarctica once. I say this now and it still doesn’t seem quite real. In 2004, the British Antarctic Survey and Arts Council England gave me a place on their Writers & Artists fellowship programme. I flew to the Falklands and boarded a British Antarctic Survey research ship, heading for South Georgia, Port Lockroy, and the Antarctic research base of Rothera. I saw icebergs, glaciers, abandoned whaling stations, Ernest Shackleton’s grave, penguins, elephant seals, albatrosses, and a lot of ice. The trip didn’t work out as planned – there were difficulties getting through the sea-ice, and I never made it to the research base – but it was still an incredible experience.

People asked me, when I came back, what it had been like. Well, I said… it’s kind of hard to describe?

They nodded when I said this, in a way that seemed to say: you have literally one job and that job is describing things.

Which was a fair point.

I started work on a novel. It was something to do with the experience of working in Antarctica, and map-making, and ideas of heroism and self-sufficiency and male self-delusion. There were icebergs, and wooden huts, and a lot of cocoa. And I kept losing my bearings when faced with the essential problem that the territory is so other and unknowable; so difficult to put into words.

Time passed. I wrote some other books. I kept thinking about language, and communication, and the ways in which people fail to make themselves understood. I learnt about aphasia – the difficulties in constructing or comprehending language which can follow a brain injury – and I started attending a self-help group for people with aphasia. Seeing the ways in which people with very little language are still able to communicate was fascinating; it was also, of course, painful to hear the frustration experienced when people are unable to say what they mean.

The Great Antarctic Novel became instead an attempt to write a novel, in words, about the absence of language. It was pretty difficult, I have to say. It became a novel about relationships, and inarticulacy, and the signs and signals we use to make sense of the stories of our lives. It became like all my novels, in other words, but more so.

What took you so long, I can imagine someone at the Arts Council asking. Well… it’s kind of hard to explain?

When an Antarctic research expedition goes wrong, the consequences are far-reaching – for the men involved and for their families back home.

Robert “Doc” Wright, a veteran of Antarctic field work, holds the clues to what happened, but he is no longer able to communicate them. While Anna, his wife, navigates the sharp contours of her new life as a carer, Robert is forced to learn a whole new way to be in the world.

Award-winning novelist Jon McGregor returns with a stunning novel that mesmerizingly and tenderly unpicks the notion of heroism and explores the indomitable human impulse to tell our stories – even when words fail us.  A meditation on the line between sacrifice and selfishness this is a story of the undervalued, unrecognised courage it can take just to get through the day. 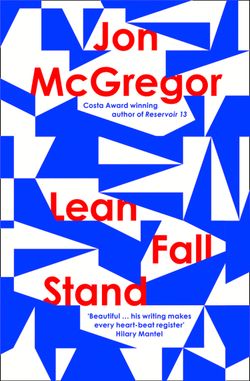