‘I wanted to challenge the idea that any of this is easy to understand.’ Kate Elizabeth Russell introduces My Dark Vanessa.

As riveting as it is disturbing, Kate Elizabeth Russell’s My Dark Vanessa goes straight to the heart of some of the most complex issues of our age. Nuanced, uncomfortable, bold and powerful, this is an era-defining novel that will be talked about everywhere in 2020 and potentially for many years to come.

“We like to believe that victims and abusers can be boiled down to archetypes who behave in predetermined ways, but in My Dark Vanessa I wanted to challenge that by creating in Strane a character who is undeniably abusive while also vulnerable, and in Vanessa a victim who says yes even as her life is torn apart. I wanted to show how little can separate coercion from seduction, and how memories, especially traumatic ones, can be malleable and change over time.

In short, I wanted to challenge the idea that any of this is easy to understand.

Sexual abuse is a difficult subject – difficult to talk about, to write, to encapsulate. Victimhood is often portrayed as a one-dimensional experience of helplessness and passivity. While writing this book, I was drawn to an intimidatingly complex question: can a victim willingly participate in her own victimhood? And if so, is it possible that choosing victimhood might feel empowering? Throughout My Dark Vanessa, Vanessa is accused by others of romanticising her own abuse, but what if her tendency to romanticise is a means of survival?

It’s true that My Dark Vanessa is about a girl groomed by a calculating man but Strane is also generous, attentive. When Vanessa meets him she’s a scholarship student at a prestigious boarding school, feeling out of place and out of her depth. Strane tells her that she possesses something the rich students with perfect grades will never have, that she writes like a prodigy, that she understands him and is the only person who ever has. Yes, these are all lines used by a master manipulator on his prey, but can the lines also be true?

Because what’s the alternative – that you weren’t special? That instead you were a fool, duped by a predator? And what about the possibility that your enabling of this man allowed him to go on to hurt other girls?

As the novel opens, we learn that another former student has accused Strane of sexual abuse, and this sets up the central conflict of the novel. From page one, Vanessa is a woman facing an impossible choice: either cling to the belief that at fifteen she was a willing lover to a middle-aged man, or accept that the most formative, defining relationship of her life was actually rape. Neither option is safe. Neither will leave her unchanged.”

All he did was fall in love with me and the world turned him into a monster.

Vanessa Wye was fifteen-years-old when she first had sex with her English teacher.
She is now thirty-two and in the storm of allegations against powerful men in 2017, the teacher, Jacob Strane, has just been accused of sexual abuse by another former student. Vanessa is horrified by this news, because she is quite certain that the relationship she had with Strane wasn’t abuse. It was love. She’s sure of that.

My Dark Vanessa is published in trade paperback on 10th March 2020. 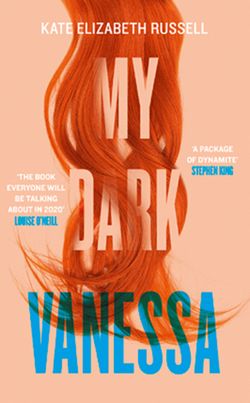