Kester Grant on the background to writing The Court of Miracles:

“The Court of Miracles was born out of four things. Firstly as a Les Misérables uber-fan (both book and musical), I was always frustrated by the unfulfilled potential of Eponine; a young self educated, literate cat-burglar from a criminal family, who gets fridged to further the story of one of the books male heroes.

Then there was the Cosette – Eponine relationship, here we have two little girls who lived together in a violent criminal household as children, who meet again as adults, one reduced to a life of crime, the other now living a respectable middle-class life.

Les Mis is a great classic and Hugo was a genius. But as a girl I felt that two females with such a complicated and traumatic history, should have more of a reaction and relationship with one another than the work allows.

They should love or hate one another, but they could not be reduced to one throwaway line; “We were girls together she and I.”  Instead of all the dramatic tension and complicated female dynamics that should naturally follow their reunion, we have to witness both failing every Bechdel test, losing all sense of self and backbone as they fall in love with the same boy. Surely anyone who’s read Les Mis must agree that Marius is a ridiculous waste of space; he spends a whole chapter crying on a tree and clutching Cosette’s foot (who even does that?).

I remember as a small child shaking my fist at the sky and swearing to one day write a story where Eponine and Cosette got the screen-time they deserved.

And thirdly there was the day I watched Disney’s live action Jungle Book movie. As I walked out of the cinema, I remember thinking that the story of Mowgli, a vulnerable human boy amongst a society of dangerous animals, was much like the story of Cosette; a young innocent girl fostered by a family of criminals.

Fourthly there is Human Trafficking, it is the invisible evil that surrounds us.

Having lived on three continents I can testify that this cancer of our society is as present in the UK, as in the USA, and Africa. I still remember the day I first learnt about the trafficking and sexual slavery of women and children. I think I bottled up all the horror of that revelation and years later poured it out into The Court of Miracles. That is why I will be donating a portion of the sales of every copy of The Court of Miracles to ZOE International*, an association that combats the trafficking of children, whilst rescuing and rehabilitating victims.

The Jungle book, criminal societies, wide-eyed innocents, human traffickers, strong females with strong relationships, all these things combined in my brain into one lightning flash of inspiration.

Suddenly I saw cat-burglar Eponine, hanging off the side of a building in a storm, exhausted from searching every window of the city of Paris for her lost sister, determined to save her from the monster who had stolen her. And thus, was The Court of Miracles born. “

*you can read more about the work of Zoe International at gozoe.org

The Court of Miracles is published in trade paperback on 4th June 2020. 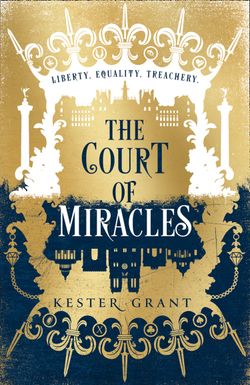