How I ended up writing Last Tang Standing, the Great Malaysian Novel you never knew you needed

I read The God of Small Things as an adolescent and it really marked me. I began fantasizing about writing the Great Malaysian Novel of my generation. Obviously, hubris is one of my flaws, considering I was all of 14 years old. Furthermore, back then there weren’t that many Malaysian authors who had broken into the international market that I knew of, aside from two of my favourite authors, Tash Aw and Tan Twan Eng. Both Malaysians had gone to law school and become lawyers, before finally giving in to the ungodly urge to renounce the security of their white-collar jobs and become authors—full-time authors.

So the path was clear—I had to become a lawyer. First. Like them, I did, after all, have a Chinese Mom, and by God, try telling a Chinese Mom, even one who is by no means a tiger-y one, that you want to be a full-time writer—without a university degree. “To write what?” she’d probably screech. And that would be the end of it. Not because she’d murdered me (she still needs me to take care of her when she’s old), but because the howls of protest from all my living relatives, who she would have alerted over the next 24 hours, would have shattered my eardrums. So it was off to law school I went.

After law school I worked with the UNHCR in Kuala Lumpur for a bit, met my future husband, and decided, after a long-distance relationship of a year or so to move to Luxembourg, where he was studying for his bar. I completed my bilingual masters and began working in one of the largest law firms there, followed by the central bank of Luxembourg. I had a great time in Luxembourg but was constantly homesick, and in 2013 we moved to Singapore. I went back to working in the non-profit sector again, and since I was (most likely) already disappointing my ancestors I thought, let’s push the envelope a little more—let’s try stand-up comedy!

Performing stand-up, which I did at an amateur level for two years, was an important step in my evolution as a writer. I don’t think I’ve ever mastered on-stage delivery and timing, but the time spent analysing the mechanics of a joke and practicing the craft has made me a better writer in general (the great Amy Hempel herself was described as having spent a lot of time in comedy clubs in the 70s). At very least it has certainly made me more popular at dinner parties.

Then one day, after doing a set where I’d been riffing on the consequences of giving conditional vs unconditional love to Chinese children in terms of their future careers, Andrea Tang strolled into my head, fully formed – this snarky, Daria-esque woman who was equal parts cynic and optimist, who was ahead in the game of life yet downtrodden, throttled by the expectations of others, and I was floored. I knew who she was and what she was about, even if she didn’t know half of it yet. I knew her story, and I wanted to be the one to tell it.

With Andrea as the scaffolding and cornerstone, I built a chatty, epistolary novel featuring an all-Asian cast of characters, and set almost entirely in Singapore, over the course of a week. When I had more or less nailed down the plot, I told my husband that I had finally found my novel. To which he grunted and said, in a voice too full of cynicism for a marriage that young, stop talking about writing a novel and just do it. So I did. And somehow the Great Malaysian Novel I’d always wanted to write, that thunking literary tome, began to morph into something else: a comedic coming-of-age novel with a multicultural Asian cast, doing quotidian things like attending a concert; gossiping; getting our hair done; eating our food and not having it labelled ethnic; traveling; kissing; fighting; having orgasms. And I set it in a country where I’d had my own, somewhat belated coming-of-age: Singapore, a country that chafes and strains under its drive to achieve an aspic perfection, a country that despite its shared history with Malaysia has become, in many ways, the mirror image of Malaysia: same same, but different.

I’m not sure if Last Tang Standing is the novel I’d grown up envisaging I would write, but it certainly is the one I felt most compelled to finish. Growing up, I seldom encountered contemporary fiction that was written in English and featured female Asian leads gracing the shelves of my local bookstore, much less books by South-East Asian female authors. When I wrote the story in 2015/2016 and started tentatively shopping for an agent late 2017/early 2018, I was fortunate to have had Kevin Kwan’s series Crazy Rich Asians break new ground for Asian-centric literature. You better believe there’s a poster of Kevin Kwan with a pot of flowers standing under it in a corner of my house.

I tried my best to draw attention to an issue that really bothers me, so-called “casual racism” in dating and marriage, and the othering that occurs between communities of colour in my part of the world. Both my protagonist Andrea, who is of Chinese ethnicity, and one of her love interests Suresh, who is British and of Indian origin, are caught by history’s traps that were first set by colonialists, but later reinforced, re-inflicted of our own volition. We are all people of colour, yet we “other the other”. In Malaysia and Singapore, where racial lines are clearly drawn amongst us in our day-to-day lives, this novel was my way of holding a mirror up t0 society and forcing us to confront our behavior, to spark debate, to challenge ourselves to aim higher than those who came before us.

Representation is so important, because when we read about the experiences of people whose cultures, identities, traditions, entire histories and lives differ from ours, we learn to look beyond the skin and find the common, underlying humanity that links all of us, while celebrating what makes us different and what makes us alike. It’s an honour to be able to represent a facet of the Chinese diaspora and the multiculturalism that exists in South-East Asia.

And that is why Last Tang Standing, the Great Malaysian Novel that is set in Singapore, exists.

Like all good Chinese children, Andrea Tang is doing her best to fulfil all her mother’s plans for her life: she’s on track to become partner at a top law firm in Singapore, she has a beautiful apartment in the right postcode and a perfect boyfriend who is practically made of husband material.

Except that those plans are unravelling fast: there’s an unfairly attractive new lawyer out to steal her promotion, she has credit-card debt up to her eyeballs, her perfect boyfriend is now her perfect ex-boyfriend and the last single cousin in her family just got engaged, leaving her exposed to romantic meddling on all sides…

For fans of Crazy Rich Asians and Bridget Jones’s Diary comes a hilarious story of love, friendship and the most intrusive people in the world: family. 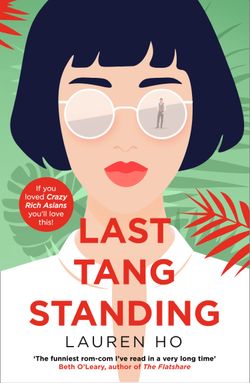