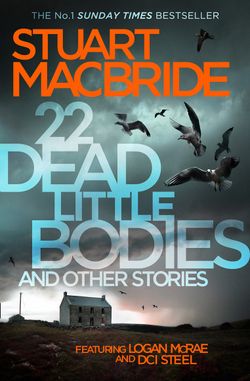 From the No. 1 bestselling author of THE MISSING AND THE DEAD comes the short novel: 22 DEAD LITTLE BODIES, plus two short stories: STRAMASH and DI STEEL’S BAD HEIR DAY, and a novella: THE 45% HANGOVER, all featuring his most popular characters – DS Logan McRae and DCI Roberta Steel.

They say ‘small is beautiful’, but as Stuart MacBride demonstrates in these four tales, it can also be dark, violent, disturbing, and sometimes really quite rude.

So pour yourself a wee dram, curl up on the sofa and enjoy DS Logan McRae and his sometime boss, friend, mother substitute, and nemesis, DCI Steel at their best.

Here you’ll find Logan’s week from hell; Steel’s own personal nightmare before Christmas; an explosive shootout on a remote Scottish island; and the ultimate test of their relationship…

Stuart MacBride is the No 1 bestselling author of the Logan McRae series and the Ash Henderson novels.The McRae novels have won him the CWA’s Dagger in the Library, the Barry Award for Best Debut Novel, and Best Breakthrough Author at the ITV3 Crime Thriller Awards. In 2012 Stuart was inducted into the ITV3 Crime Thriller Hall of Fame.