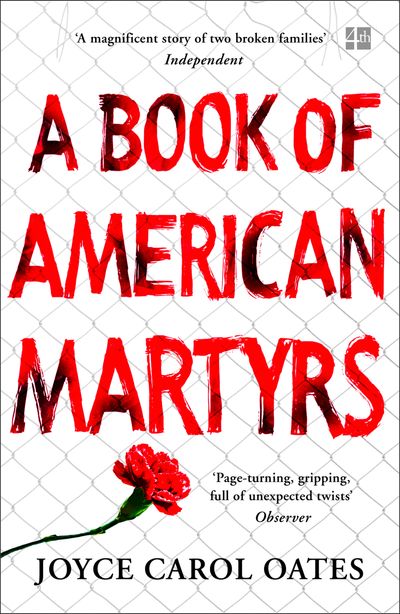 A Book of American Martyrs

One violent crime that will bitterly divide them – and yet bind them together forever.

‘From its dramatic opening, with the killing of an abortionist, the book rockets forwards … Ingenious, agile, dazzling’ Literary Review

Author: Joyce Carol Oates
Format: Paperback
Release Date: 19 Oct 2017, 10 Oct 2017 (Export Date)
Pages: 752
ISBN: 978-0-00-822171-3
Price: £14.99 (Export Price) , £14.99
Joyce Carol Oates is a recipient of the National Medal of Humanities, the National Book Critics Circle Ivan Sandrof Lifetime Achievement Award, the National Book Award, and the PEN/Malamud Award for Excellence in Short Fiction. She has written some of the most enduring fiction of our time, including We Were the Mulvaneys; Blonde, which was nominated for the National Book Award; and the New York Times bestseller The Accursed. She is the Roger S. Berlind Distinguished Professor of the Humanities at Princeton University and has been a member of the American Academy of Arts and Letters since 1978.

”'A magnificent story of two broken families, both steeped in grief” - Independent

”'Icily subtle … at its spine-tingling best when staring into the dark, a sliver away from the Gothic” - Spectator

”'The most relevant book of Oates’s half-century-long career . . . a masterpiece” - Washington Post

”'Oates's American saga captivates because it exists within an actual drama playing out across the country. A graceful and excruciating story of two families who do not live very far apart, but exist in different realities” - USA Today