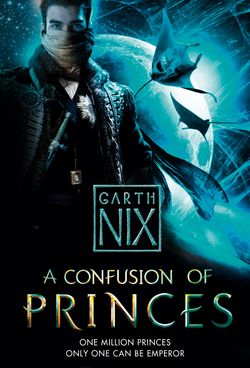 A major standalone space opera, this is Garth Nix’s first novel for older readers since the conclusion of the Old Kingdom trilogy… and it’s worth the wait.

A grand adventure that spans galaxies and lifetimes, A Confusion of Princes is also a page-turning action adventure.

These are the three deaths of Prince Khemri. Told in his own words, we follow him as he trains to become a Prince of the Empire, an enhanced human being, equipped with biological and technological improvements that make him faster, stronger and smarter than any ordinary person. Not to mention the ultimate benefit: should he die, and be deemed worthy, he will be reborn…

Which is just as well, because no sooner has Prince Khemri graduated to full Princehood than he learns the terrible truth behind the Empire: there are a million princes, and all of them want each other dead, because there can only be one Emperor…

Garth Nix was born in 1963 in Melbourne, Australia, to the sound of the Salvation Army band outside playing’Hail the Conquering Hero Comes’ or possibly’Roll Out the Barrel’. Garth left Melbourne at an early age for Canberra (the federal capital) and stayed there till he was nineteen, when he left to drive around the UK in a beat-up Austin with a boot full of books and a Silver-Reed typewriter. He is now an award-winning author and one of the most influential names in contemporary fantasy.