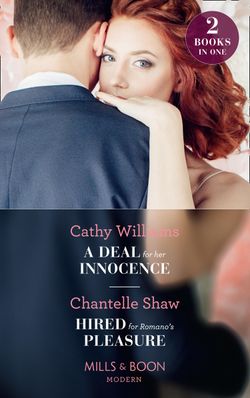 A Deal for Her Innocence by Cathy Williams

Ellie Wilson only has eyes for her job…until she meets gorgeous Niccolo Rossi! After arriving at his Caribbean resort Ellie’s pitch suddenly involves her playing his girlfriend. But seduction might be Niccolo’s highest priority…

Orla has never forgotten Torre’s cruel rejection—or the white-hot pleasure they found together! Working late nights with him is sensual torture…and Torre is tempting Orla to play with fire once again…

Cathy Williams is a great believer in the power of perseverance as she had never written anything before her writing career, and from the starting point of zero has now fulfilled her ambition to pursue this most enjoyable of careers. She would encourage any would-be writer to have faith and go for it! She derives inspiration from the tropical island of Trinidad and from the peaceful countryside of middle England. Cathy lives in Warwickshire her family.