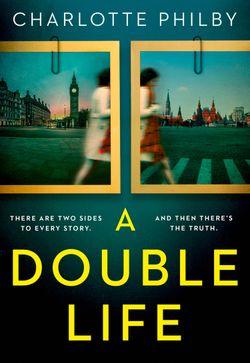 The Times Best Books for Summer 2020

THERE ARE TWO SIDES TO EVERY STORY.

AND THEN THERE’S THE TRUTH.

Gabriela, a senior negotiator in the FCO’s counter-terrorism unit, runs a small and powerful team based in Whitehall. She is tenacious, hard-working and the family breadwinner. Her partner Tom – a freelance architect – looks after their two small children. When Gabriela returns from a seven-month stint in Moscow, something doesn’t seem right.

Isobel is a journalist working for the local paper in Camden. Walking home from a party one night, she witnesses a horrific attack. But someone has seen her, and is making themselves known in increasingly frightening ways. As Isobel starts to investigate, she uncovers a dark network of human trafficking and exploitation.

While Gabriela’s life begins to unravel, Isobel gets closer to the story. With one desperate to uncover the truth, and the other determined to hide it, the two women’s lives converge.

Compulsive and compelling A Double Life is a beautifully written and deeply chilling examination of deceit.

Now a freelance journalist, Charlotte Philby worked for the Independent for eight years as a columnist, editor and reporter, and was shortlisted for the Cudlipp Prize for her investigative journalism at the 2013 Press Awards. A former contributing editor and feature writer at Marie Claire, she is founder of the online platform Motherland.net, and has contributed to all the major newspapers, as well as the BBC, Channel 4 and numerous magazines and books. Charlotte is the granddaughter of Kim Philby, Britain’s most famous communist double-agent, the elusive ‘third man’ in the notorious Cambridge spy ring. She has three children and lives in London.