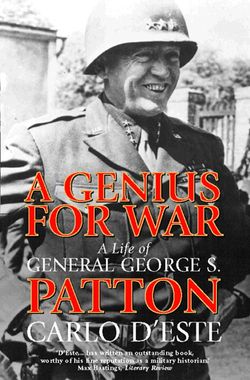 Patton: A Genius for War is a full-fledged portrait of an extraordinary American that reveals the complex and contradictory personality that lay behind the swashbuckling and brash facade.

The public image of General George S. Patton Jr. has been influenced overwhelmingly by the George C. Scott film Patton, in which he is portrayed as a brash ‘Old Blood and Guts’. Now, for the first time, Carlo D’Este reveals a very different, contradictory personality. With full access to Patton’s private and public papers, and the co-operation of his family, D’Este presents an acute portrait of Patton’s career and shows not only the extrovert Patton of public perception but also Patton the intensely private man who could burst into tears, be charming or profane quite unexpextedly, but who trained himself for greatness with a determination matched by no other general in the twentieth century.