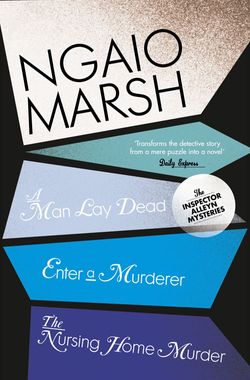 Commemorating 75 years since the Empress of Crime’s first book, the first volume in a set of omnibus editions presenting the complete run of 32 Inspector Alleyn mysteries.

A MAN LAY DEAD
Sir Hubert Handesley’s extravagant weekend house-parties are deservedly famous for his exciting Murder Game. But when the lights go up this time, there is a real corpse with a real dagger in the back. All seven suspects have skilful alibis – so Chief Detective Inspector Roderick Alleyn has to figure out the whodunit…

ENTER A MURDERER
The crime scene was the stage of the Unicorn Theatre, when prop gun fired a very real bullet; the victim was an actor clawing his way to stardom using bribery instead of talent; and the suspects included two unwilling girlfriends and several relieved blackmail victims. The stage is set for one of Roderick Alleyn’s most baffling cases…

THE NURSING HOME MURDER
A Harley Street surgeon and his attractive nurse are almost too nervous to operate. Their patient is the Home Secretary – and they both have very good personal reasons to want him dead. The operation is a complete success – but he dies within hours, and Inspector Alleyn must find out why…