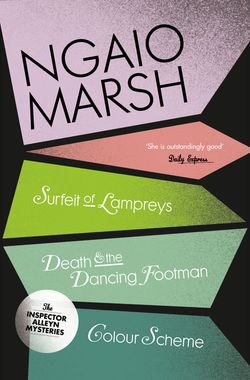 Commemorating 75 years since the Empress of Crime’s first book, the fourth volume in a set of omnibus editions presenting the complete run of 32 Inspector Alleyn mysteries.

SURFEIT OF LAMPREYS
The Lampreys were a peculiar family. They entertained their guests with charades – like rich Uncle Gabriel, who was always such a bore. The Lampreys thought if they jollied him up he would bail them out of poverty again. But Uncle Gabriel meets a violent end, and Chief Inspector Alleyn had to work out which of them killed him…

DEATH AND THE DANCING FOOTMAN
It begins as an entertainment: eight people, many of them adversaries, gathered for a winter weekend by a host with a love for theatre. It ends in snowbound disaster. Everyone has an alibi – and a motive as well. But Roderick Alleyn soon realizes that it all hangs on Thomas, the dancing footman…

COLOUR SCHEME
It was a horrible death -lured into a pool of boiling mud and left to die. Roderick Alleyn, far from home on a wartime quest for enemy agents, knows that any number of people could have killed him: the English exiles he’d hated, the New Zealanders he’d despised, or the Maoris he’d insulted. Even the spies he’d thwarted…