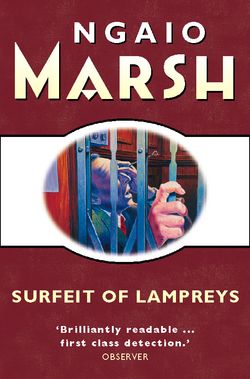 The Lampreys had plenty of charm – but no cash. They all knew they were peculiar – and rather gloried in it. The double and triple charades, for instance, with which they would entertain their guests – like rich but awful Uncle Gabriel, who was always such a bore. The Lampreys thought if they jollied him up he would bail them out – yet again.

Instead, Uncle Gabriel met a violent end. And Chief Inspector Alleyn had to work our which of them killed him…

Dame Ngaio Marsh was born in New Zealand in 1895 and died in February 1982. She wrote over 30 detective novels and many of her stories have theatrical settings, for Ngaio Marsh’s real passion was the theatre. She was both actress and producer and almost single-handedly revived the New Zealand public’s interest in the theatre. It was for this work that she received what she called her ‘damery’ in 1966.