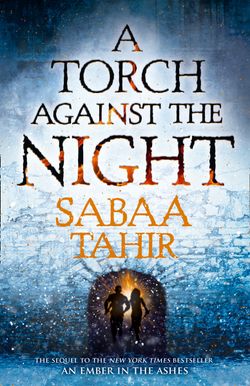 The sequel to the explosive New York Times bestselling debut AN EMBER IN THE ASHES, that’s captivated readers worldwide.

A TORCH AGAINST THE NIGHT takes readers into the heart of the Empire as Laia and Elias fight their way north to liberate Laia’s brother from the horrors of Kauf Prison. Hunted by Empire soldiers, manipulated by the Commandant, and haunted by their pasts, Laia and Elias must outfox their enemies and confront the treacherousness of their own hearts.

In the city of Serra, Helene Aquilla finds herself bound to the will of the Empire’s twisted new leader, Marcus. When her loyalty is questioned, Helene finds herself taking on a mission to prove herself—a mission that might destroy her, instead.

Sabaa Tahir grew up in California’s Mojave Desert at her family’s eighteen-room motel. There, she spent her time devouring fantasy novels, raiding her brother’s comic book stash, and playing guitar badly. She began writing An Ember in the Ashes while working nights as a newspaper editor. She likes thunderous indie rock, garish socks, and all things nerd. Sabaa currently lives in the San Francisco Bay area with her family.