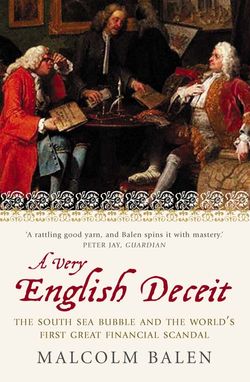 The paperback of the critically acclaimed popular history book: the story of the South Sea Bubble which in Balen’s hands becomes a morality tale for our times. A classic collision of political ambition, mercenary greed and financial revolution.

The early years of the 18th-century produced two great monuments: one, Christopher Wren’s new cathedral of St Paul’s, an enduring testament to principled craft and masterful construction; the other, an empty fraud of such magnitude that its collapse threatened to overturn monarchies and governments. Its failure delayed the introduction of modern market economies by two generations. Yet the full scale of this monumental deceit was quietly covered up and hidden, its enduring legacy a poorly understood colloquialism: the South Sea Bubble.

It was all planned by one ambitious promoter, who had decided to launch ‘a company for carrying on an undertaking of great advantage, but nobody to know what it is’. This eighteenth-century mission statement has now acquired an almost uncanny resonance: these words could aptly have been applied to the bursting of the internet bubble and the collapse of Enron. With the financial scandals that have beset global companies recently, such as Rank Xerox and Worldcom, this tale is all the more relevant today.

Balen reveals the full story of corruption and scandal that attended the birth of the first shareholder economy, and with it uncovers a parable for our times.

Malcolm Balen is the author of a much praised biography of Kenneth Clarke. With a degree in History from Cambridge, he is currently editor of ITN’s Carlton news, having previously worked as editor of the BBC Nine O’Clock news and for Channel 4.