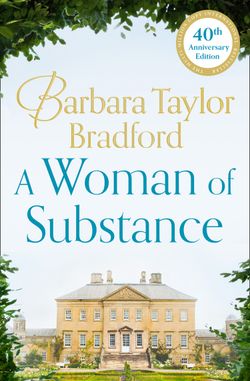 By 1968 she is one of the richest women in the world, ruler of a business empire stretching from Yorkshire to the glittering cities of America and the rugged vastness of Australia. But what is the price she has paid?

A Woman of Substance is as impossible to put down as it is to forget. This multi-million copy bestseller is truly a novel of our times.

‘Queen of the genre’ Sunday Times

Barbara Taylor Bradford was born and raised in England. She started her writing career on the Yorkshire Evening Post and later worked as a journalist in London. Her first novel, A Woman of Substance, became an enduring bestseller and was followed by many more, including the bestselling Cavendon series. Barbara’s books have sold more than eighty-one million copies worldwide in more than ninety countries and forty languages. In October of 2007, Barbara was appointed an OBE by the Queen for her services to literature.