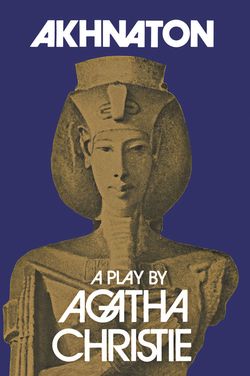 For the first time since its original one-off publication in 1973, a replica edition of Agatha Christie’s rarest book, the drama of King Akhnaton’s doomed attempt to subvert the old religion of ancient Egypt, based on Christie’s researches in Luxor.

Set in 1350 BC, the legend of Akhnaton tells of the Pharoah’s attempt to convince his nation to abandon their old ‘pagan’ god Amon and to turn to the worship of a new deity, the monotheistic sun god, Aton.

Introduced to the legend by Howard Carter, discoverer of Tutankhamun’s tomb, when she met him in Luxor in 1931, Agatha Christie became fascinated by both the story and the society in which it took place. Her painstaking researches led to this retelling of the story in the form of a highly readable and dramatic two-hour play.

Akhnaton was written by Agatha Christie in 1937, when her interest in Egyptology from her travels with her archaeologist husband was at its height. Probably her most serious play, it was deemed too ambitious to be performed, and it went unknown and unpublished until Collins released a hardback edition in 1973. Never paperbacked or published subsequently, this rare edition has become the Holy Grail for Agatha Christie collectors, keen to learn more about this unique drama and to discover its relevance alongside her other Egyptian books such as Death Comes As the End, Death on the Nile, Appointment With Death and Come, Tell Me How You Live. Now this facsimile edition of the original hardback at last gives Christie fans the chance to discover for themselves one of Agatha Christie’s most highly sought after and exotic creations.