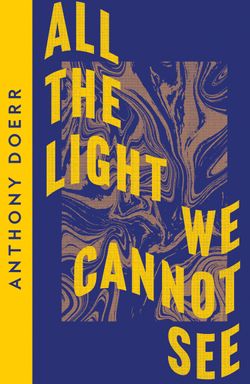 Open your eyes, and see what you can with them before they close forever

For Marie-Laure, blind since the age of six, the world is full of mazes: the miniature model of her Paris neighbourhood she traces with her fingers; the microscopic layers within the diamond in the Museum of Natural History; the unmapped future which brings her ever closer to Werner, a German orphan, whose talents draw the attention of the Hitler Youth.

A deeply moving novel about the ways people try to be good to one another, All the Light We Cannot See has touched the hearts of millions of readers across the world, and was awarded the Pulitzer Prize for Fiction.

‘Far more than a conventional war story, it’s a tightly focused epic … A bittersweet and moving novel that lingers in the mind’ Daily Mail

Anthony Doerr is the author of four books, The Shell Collector, About Grace, Four Seasons in Rome and Memory Wall. Doerr's short fiction has won three O. Henry Prizes and has been anthologized in The Best American Short Stories, The Anchor Book of New American Short Stories, and The Scribner Anthology of Contemporary Fiction. He has won the Rome Prize, and shared the New York Public Library's Young Lions Fiction Award with Jonathan Safran Foer. In 2007 Granta placed Doerr on its list of the "21 Best Young American novelists." Doerr lives in Boise, Idaho, with his wife and two sons.