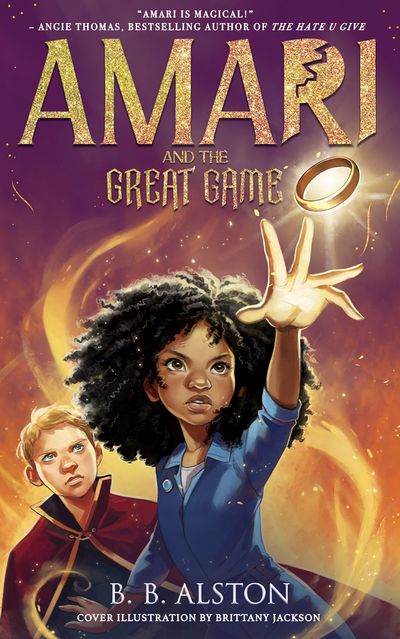 Amari and the Great Game

Sequel to the New York Times bestseller Amari and the Night Brothers!

After finding her brother and saving the entire supernatural world, Amari Peters is convinced her first full summer as a Junior Agent will be a breeze.

But between the fearsome new Head Minister’s strict anti-magician agenda, fierce Junior Agent rivalries, and her brother Quinton’s curse steadily worsening, Amari’s plate is full. So when the secretive League of Magicians offers her a chance to stand up for magiciankind as its new leader, she declines. She’s got enough to worry about!

But her refusal allows someone else to step forward, a magician with dangerous plans for the League. This challenge sparks the start of the Great Game, a competition to decide who will become the Night Brothers’ successor and determine the future of magiciankind.

The Great Game is both mysterious and deadly, but among the winner’s magical rewards is Quinton’s last hope . . . so how can Amari refuse?

Author: BB Alston
Format: Trade Paperback
Ageband: 8 to 12
Release Date: 01 Sep 2022
Pages: 400
ISBN: 978-0-00-855435-4
Price: £10.99 (Export Price) , £10.99
B.B. Alston started writing in middle school, entertaining his classmates with horror stories starring the whole class where not everyone survived! He had just been accepted into a biomedical graduate program when a chance entry into a twitter pitch contest led to his signing with his agent, 20+ book deals worldwide, and even a film deal. When not writing, he can be found eating too many sweets and exploring country roads to see where they lead.

Praise for Amari and the Night Brothers: -

'An enchanting fantasy adventure filled with heart and soul. Amari is magical!', Angie Thomas, New York Times-bestselling author of The Hate U Give -

'As a former black girl misfit who wanted nothing more in the world than to be magical, this book is a song to my soul. Amari is the heroine we all need.', Nic Stone, New York Times-bestselling author of Dear Martin -

'The surprises and story never slow down for a minute in this magical, astonishing world, with a heroine who’s like Buffy meets Meg Murry multiplied by Shuri to the power of awesome. I want to live in Amari’s world and watch her save it (or have her come here and save ours!)!', Tui Sutherland, bestselling author of the Wings of Fire series -

'Clever, imaginative, and filled with heart. I loved every magical page.', J.C. Cervantes, New York Times-bestselling author of The Storm RunnerPraise for Amari and the Night Brothers: -