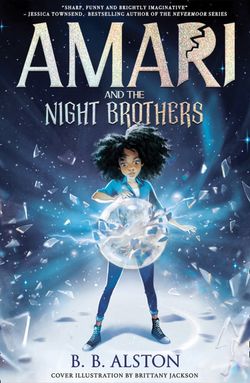 An epic middle grade supernatural adventure series, soon to be a major movie starring Marsai Martin. Perfect for readers aged 8+ and fans of Percy Jackson, Nevermoor and Men in Black.

Her big brother Quinton has gone missing.
No one will talk about it.
His mysterious job holds the secret …

So when Amari gets an invitation to the Bureau of Supernatural Affairs, she’s certain this is her chance to find Quinton. But first she has to get her head around the new world of the Bureau, where mermaids, aliens and magicians are real, and her roommate is a weredragon.

Amari must compete against kids who’ve known about the supernatural world their whole lives, and when each trainee is awarded a special supernatural talent, Amari is given an illegal talent – one that the Bureau views as dangerous.

With an evil magician threatening the whole supernatural world, and her own classmates thinking she is the enemy, Amari has never felt more alone. But if she doesn’t pass the three tryouts, she may never find out what happened to Quinton …

B. B. Alston lives in Lexington, SC. Amari and the Night Brothers is his debut middle grade novel. When not writing, he can be found eating too many sweets and exploring country roads to see where they lead.

B.B. Alston started writing in middle school, entertaining his classmates with horror stories starring the whole class where not everyone survived! After several years of trying to break into publishing, he had just been accepted into a biomedical graduate program when a chance entry into a twitter pitch contest led to his signing with his agent, 20+ book deals worldwide, and even a film deal. When not writing, he can be found eating too many sweets and exploring country roads to see where they lead.B.B. was inspired to write AMARI AND THE NIGHT BROTHERS because he couldn’t find any fantasy stories featuring Black kids when he was growing up. He hopes to show kids that though you might look different, or feel different, whatever the reason, your uniqueness needn’t only be a source of fear and insecurity. There is great strength and joy to be found in simply accepting yourself for who you are. Because once you do so, you’ll be unstoppable.