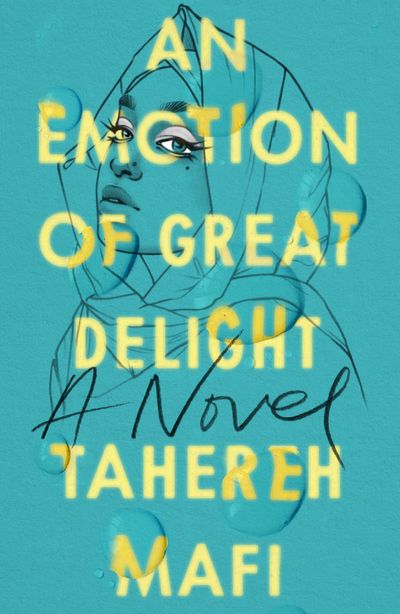 An Emotion Of Great Delight

From bestselling author of the Shatter Me series and the National Book Award-nominated A Very Large Expanse of Sea, Tahereh Mafi, comes a stunning novel about love and loneliness, navigating dual-identity as a Muslim teenager in America, and reclaiming your right to joy.

It’s 2003. It’s been several months since the US officially declared war on Iraq, and the political world has evolved. Shadi, who wears hijab (a visible allegiance to Islam) keeps her head down. Hate crimes are spiking. Undercover FBI agents are infiltrating mosques and interrogating members of the congregation, and the local Muslim community is beginning to fracture. Shadi hears the fights after services, the arguments between families about what it means to be Muslim, about what they should be doing and saying as a community but she does not engage.

She’s too busy drowning in her own troubles to find the time to deal with bigots.

Shadi is named for joy, but she’s haunted by sorrow. Her brother is dead, her father is dying, her mother is falling apart, and her best friend has mysteriously dropped out of her life. And then, of course, there’s the small matter of her heart
It’s broken. Shadi has tried to navigate the remains of her quickly-shattering world by soldiering through, saying nothing, until finally, one day, everything changes.

Perfect for fans of the Shatter Me series as well as Angie Thomas’s The Hate U Give and Nicola Yoon’s The Sun is Also A Star.

Author: Tahereh Mafi
Format: Paperback
Ageband: from 12
Release Date: 10 Jun 2021, 02 Jun 2021 (Export Date)
Pages: 256
ISBN: 978-1-4052-9826-1
Price: £7.99 (Export Price) , £7.99
Tahereh Mafi is the New York Times bestselling author of the Shatter Me series which has been published in over 30 languages around the world. She was born in a small city somewhere in Connecticut and currently resides in Santa Monica, California, with her husband, Ransom Riggs, fellow bestselling author of Miss Peregrine\'s Home For Peculiar Children, and their young daughter. She can usually be found overcaffeinated and stuck in a book. You can find her online just about anywhere at @TaherehMafi or on her website, www.taherehbooks.com.

Praise for An Emotion of Great Delight: -

”'Lyrical [and] contemporary. This is an aching, emotional story that touches on various internal struggles of being a child of immigrants.” - - Buzzfeed

”'Gorgeous and poetic, Mafi is unflinching in her rendering of pain and brutal truths, but also succeeds in weaving a tale that is brimming with heart and honest hope. This is a book I wish I'd had when I was fourteen. I'm so glad young readers will have it now. A truly special story.” - Jasmine Warga, New York Times bestselling and Newbery Honor-winning author of Other Words for Home

”'Tahereh Mafi has written a timely, compelling novel about love and family and the remarkably complex nature of religion and faith. An Emotion of Great Delight is as profound as it is beautiful.” - Matt de la Peña, New York Times and Newbery Medal winning author of The Last Stop on Market Street

”'Mafi follows her National Book Award-longlisted A Very Large Expanse of Sea (2018) with another contemporary young adult novel of striking emotional intensity. Complex and introspective Shadi details her experiences with the specific challenges of Islamaphobia and with more general issues. With masterfully compelling prose, this surprises and ensnares, leading readers to an inevitable but gripping climax. Though there's a feverous feeling throughout the book, there's also formidable nuance in Shadi’s paradoxical and contradictory thought patterns. Emotional implications of great magnitude and stakes that could not feel higher. A bluntly powerful read that shouldn't be missed.” - Booklist (starred review)

”'Mafi confronts issues of mental health, suicidality, racism, and self-love in ways that will leave readers reacting viscerally and powerfully. Reading this novel is like being dropped straight into the everyday lives of a Muslim family in post-9/11 America. A simply real story, devoid of clichés, that will leave an indelible mark.” - Kirkus Reviews (starred review)