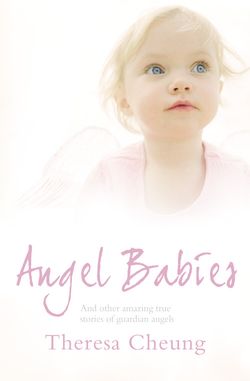 Following in the hugely popular ‘Angel Saved My Life’ series comes a moving new collection of real-life stories from the Afterlife.

A new collection of inspiring real-life encounters with the ‘other side’, including how our guardian angels often take the form of children. From angel babies that have sent messages from the womb to children with special psychic abilities who have spoken to the dead and mysterious children who have saved lives, here are dramatic stories of amazing divine intervention.

• the mysterious ten year old girl who saved the author’s baby and then disappeared
• the angel babies that have appeared to parents before they were born
• otherworldly encounters and angelic visitations to women while giving birth
• messages to children from beyond the grave
• true stories of teenage experiences of angels
• plus other true stories of angels and healing, animal angels who save their owner’s lives, and stories of visitations and near death experiences

Theresa Cheung was born into a family of psychics and astrologers. She gave her first public psychic reading at the age of 14 and has been involved in the serious study of the psychic world ever since. In addition to being a tarot reader, she has lectured and organised workshops on numerology, tarot, dreams and other aspects of the psychic world. Theresa has contributed to women's magazines such as Red, She and Here's Health as well as MBS magazines such as Fate and Fortune. She is the author of over 25 health, popular psychology and new age books including The Element Encyclopedia of 20,000 Dreams, Amazing You: Dreams and Teen Psychics.