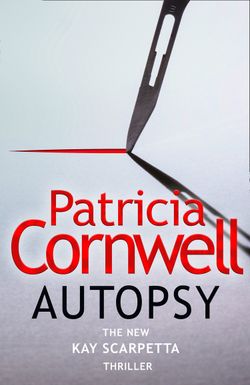 The legendary Patricia Cornwell is back with her No.1 bestselling, groundbreaking series following Kay Scarpetta

Kay Scarpetta is back, and this time she’s right in the path of danger…

World-renowned forensic pathologist Kay Scarpetta and her husband Benton, a psychologist with the US Secret Service, have returned to Virginia. They are headquartered five miles from the Pentagon in a post-pandemic world that’s been torn by civil and political unrest.

Just weeks into the job, Scarpetta is called to a railway track where a woman’s body has been shockingly displayed, her throat cut down to the spine. But the trail of clues will lead Scarpetta back to her own neighbourhood.

At the same time, a catastrophe occurs in a top-secret lab in outer space, endangering the scientists aboard. Scarpetta is summoned to the White House to find out what happened. As she starts the new investigation, an apparent serial killer strikes again, this time dangerously close to home.

‘A pioneer of the genre of forensic psychological thriller’ BBC

‘The top gun in this field’ Daily Telegraph

‘One of the best crime writers writing today’ Guardian

Patricia Cornwell is recognized as one of the world’s top bestselling crime authors with novels translated into thirty-six languages in more than 120 countries. Her novels have won numerous prestigious awards including the Edgar, the Creasey, the Anthony, the Macavity, and the French Prix du Roman d’Aventure prize. Beyond the Scarpetta series, Patricia has written a definitive book about Jack the Ripper, a biography, and two more fiction series among others. Cornwell, a licensed helicopter pilot and scuba diver, actively researches the cutting-edge forensic technologies that inform her work. She was born in Miami, grew up in Montreat, NC, and now lives and works in Boston.