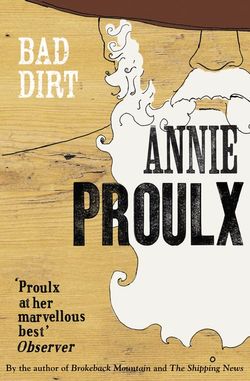 A remarkable collection of short stories set in Wyoming from the Pulitzer Prize-winning author of ‘The Shipping News’ and ‘Brokeback Mountain’.

‘Bad Dirt’ is filled with the vivid and willful characters for which Proulx has become known. Each story occupies a community or landscape described in rich and robust language, with an eye for detail unparalleled in American fiction.

In ‘The Contest’, the men of Elk Tooth, Wyoming, vow to put aside their razors for two seasons and wait to see who has the longest beard come the 4th of July. Deb Sipple, the moving protagonist of ‘That Trickle Down Effect’, finds that his opportunism – and his smoking habit – lead to a massive destruction. And ‘What Kind of Furniture Would Jesus Pick?’ is the story of Gilbert Wolfscale, whose rabid devotion to his ranch drives off his wife and sons.

Proulx displays her wit in every story of this stunning collection, as well as her knowledge of the West, of history, of ranching and of farming. Her profound sympathy for characters who must use sheer will and courage to make it in tough territory makes this collection extraordinarily compelling.

Annie Proulx published her first novel ‘Postcards’ in 1991 at the age of 56. ‘The Shipping News’ won the Pulitzer Prize for Fiction, the National Book Award and the Irish Times International Prize. Her third novel, ‘Accordion Crimes’, was published in 1996. She is also the author of three short-story collections, ‘Heart Songs’ (1994), ‘Close Range’ (1999) and ‘Bad Dirt’ (2004). ‘Brokeback Mountain’ was made into an Oscar-winning film in 2005. ‘Fine Just the Way It Is’, her third collection of Wyoming short stories, was published in 2008.